Wow, today was a rich, rich day in terms of beaver sightings! Maybe the richest day ever! Walter claimed to have stumbled upon a beaver dam in the woods by his house and he took me there to check it out. To get to the location we walked along the train tracks for some time, then cut through the woods, climbing over logs and thorny bramble things. On the way, we found some animal bones and an ancient NYC sweatshirt. The dam was really amazing. Much longer than I expected, and so neat and perfect. Walter, who knows about this sort of thing, pointed out that the dam was curved, which makes it stronger. Apparently, humans build curved dams as well. Beavers must be so smart, and know a lot about engineering (or whatever it is you know about if you build dams). Here is a picture of the location, and a picture of the dam: 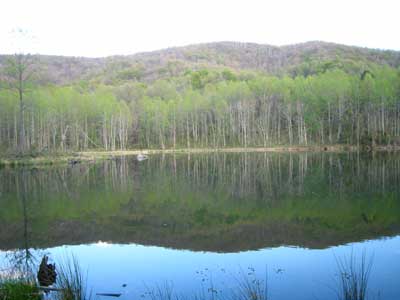 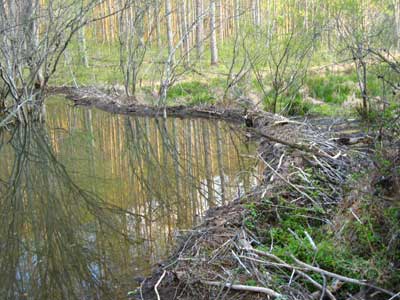 Here is a picture of a cute little beaver foot print in the mud: 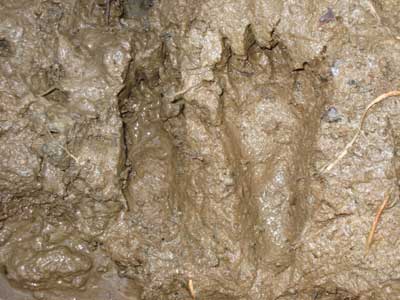 After examining the dam, we walked for quite some time along the edge of the lake, which Walter told me is called a littoral (noun: a region lying along a shore). The only reason I mention it is that he mentioned it about ten times, so I guess it must have been important to him, and hey, improving one’s vocabulary is always a good thing. Anyhow, we walked along the littoral, balancing on fallen logs and getting scratched by brambles, and seeing many chewed-on beaver sticks, like this one: 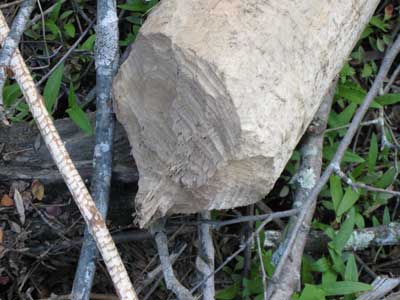 And then finally, we came to a beaver house! It was a big pile of sticks, half in the water, half out. We climbed on top of it, which was probably not very nice, but we did make an effort not to squish it or in any way hurt it or its occupants. Here is Walter on top of the beaver house, with the NYC sweatshirt. As you can see, the “C” is in a really weird place: 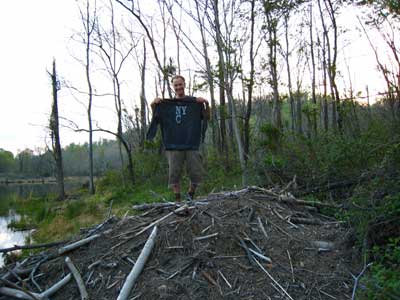 I know you are probably thinking that it could not get more exciting than this, but as we were looking at the house, Walter suddenly shouted “OHABEAVER!!!” and I looked up and saw a real, honest to goodness, live beaver dive under the water with a loud slap of his tail! It was so exciting. The beaver definitely did not seem very happy about the two of us being there. He swam around and stared at us and slapped his tail a few times. Here is a movie. Please note, not only is this the first beaver movie to appear on this site, it is my first ever iMovie. Go me. If you listen closely, you can hear some really insightful comments by me and Walter:

Anyhow, it was a totally exciting day, and even though Walter has not submitted to this site, he is certainly a friend to BLMs. Thanks, Walter.

This entry was posted in North Garden, Virginia. Bookmark the permalink.