I just got this fabulous submisison from my old friend Whitney Huston, who I went to college with, and have not talked to in ages. This submission is exciting for so many reasons. First, it was nice to hear from Whitney. Second, she lives out in California somewhere and I am happy to know that news of beaverlikemammals.com has traveled that far. Third, this qualifies as our second international sighting, and Peru is very exotic. Woo hoo!

Attached is a photo of Sam Douglas having a chat with a beaver-like mammal. The beaver-like mammal photograph was taken at Machu Picchu not so long ago. It was a very cute BLM, one was more chatty then the other (probably b/c the other was napping). They were friendly too – very unphased by all of the human attention they were getting.

PS the animal is actually a chinchilla, according to the guides there (overheard, since we didn’t hire any) and although they (the guides) are notorious for making shit up (or at least it seemed to us), they might be right. Which makes this not as much a BLM, and more like a chinchilla. Even if it’s not a chinchilla, it admittedly looks more like a rabbit than a beaver. But, I wanted to submit something and this was the only sighting I had on film. Being from Oregon though, which is, as I’m sure you know, the beaver state, I’ve seen my fair share of actual beavers. I just don’t have any caught on tape.

Thanks so much for the submission Whitney! And if you are ever home in Oregon, please keep an eye out for any beavers you might want to post about. 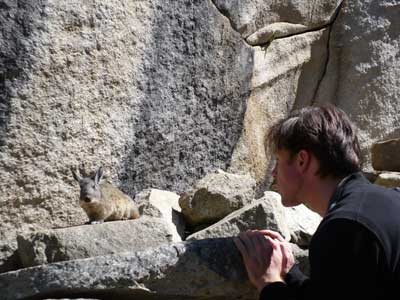 This entry was posted in International, Peru. Bookmark the permalink.