Well, I have two very exciting things to report. They take place over the course of about a week. Last weekend I was sitting on my porch and to my surprise, I looked up and saw what I thought was a BLM in a tree. And this was no squirrel, it was a very beavery BLM. High on the scale of beaver-likeness. I had no idea that BLMs of this type climbed trees so I was very surprised. I was not able to get a photo of the BLM in the tree, but I did snap a shot of the location. See below. In the photo, the approximate location of the BLM is marked with an “A”, and Dandy’s House is marked with a “B”. (See here for more info on Dandy.)

I’ve been keeping it to myself, but I’ve been really worried by the fact that I have not seen Dandy yet this season. I don’t know if this BLM was Dandy, but it was encouraging. The tree climbing I sort of wrote off as a figment of my imagination.

Fast forward to today. I was, once again, sitting on my balcony when I looked up and definitely saw a BLM up a tree. There was no denying it this time, it was clear as day! So, BLM’s do climb trees! Someone alert the scientists who study this sort of thing! I was able to snap these two photos of the BLM: 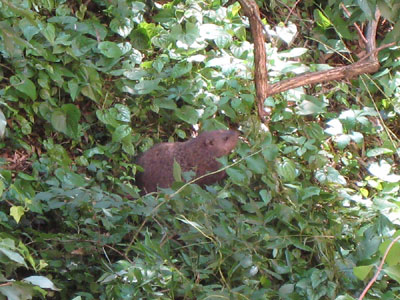 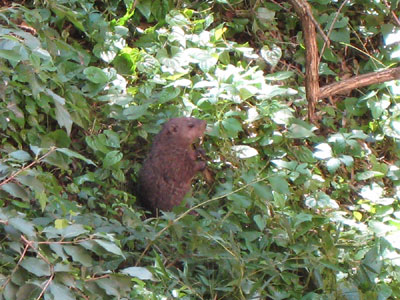 After I took these photos the BLM gallomped away and a while later I saw him sticking his head out of Dandy’s door! So I guess it is Dandy! Or at least Dandy’s house guest!

This entry was posted in Charlottesville, Virginia. Bookmark the permalink.